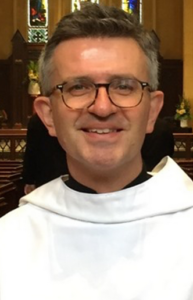 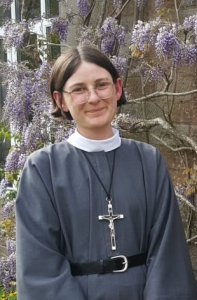 Lindsay Urwin was born in Melbourne and educated at Camberwell Grammar School.

Already intent on becoming a priest he travelled to the United Kingdom in 1976. He was prepared for ordination at Ripon College Cuddesdon as a candidate for the diocese of Melbourne, but remained in England. He was ordained in 1980 to a curacy at St Peter’s, Walworth, in the diocese of Southwark and in 1983 was made incumbent of St Faith’s, North Dulwich, also in that diocese.

In 1988 Lindsay was appointed diocesan missioner in the Diocese of Chichester and then Area Bishop of Horsham in 1993 at the age of 37.

In 1996, alongside his duties as Area bishop, he was elected Provost of the Southern Region of the Woodard Corporation of Schools, and two years later appointed by the Archbishop of Canterbury as President of the School Chaplains Association.

Lindsay was professed as a member of the Oratory of the Good Shepherd in 1991 and served as United Kingdom provincial from 1996 to 2005. He is now a brother in the Australian province.

He received an MA degree in pastoral liturgy from Heythrop College of the University of London in 2003 and was granted an honorary Doctorate in Divinity from Nashotah House, Wisconsin, in 2011.

In 2009 Lindsay resigned as area bishop of Horsham to become Administrator of the national Shrine of Our Lady of Walsingham while remaining an honorary assistant bishop in Chichester as well as in the English dioceses that cover the area of England known as East Anglia. He remains an honorary assistant bishop in the diocese of Norwich. He came back to Australia in September 2015 to be vicar of Christ Church and to be the bishop with a care for the ministry in Anglican schools.

Father Chris was ordained a deacon in September 2016 and ordained priest at the end of November 2016.

Fr Chris was formerly a minister in the Uniting Church, and before his retirement was a professor in Systematic Theology at the University of Divinity. His ordained journey before joining the Anglican Church included parish ministry as well as teaching theology. He has always had a heart for ecumenism and over the years taught many people who are now clergy serving in the Anglican Church!

Fr Chris and his wife Barbara (who remains a Uniting Church minister) began worshipping at Christ Church not long after Bishop Lindsay arrived and soon became very welcome members of the parish family.