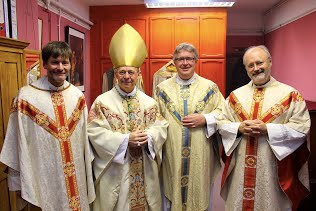 Why do priests wear a ‘poncho’ at the Eucharist?

Of course a priest doesn’t need to wear a chasuble. It’s not an essential element, and in Anglican history it has been the cause of some division. The Reformers gave them up even if the famous and influential protestant Calvin regarded the wearing of vestments as a matter ‘indifferent’, that is, not contrary to Scripture. As the Church of England was more and more influenced by the Reformation, the chasuble fell into disuse, until the 19th century and the ‘catholic revival’ or Oxford Movement which sought to recover the traditions of the early Church to the Church of England. Believe it or not, there were riots in the streets when a priest or two started wearing chasubles again, and one English priest was sent to prison for wearing one! I have a cartoon of him on my hall wall, and the chasuble he wore is now kept at the Shrine at Walsingham. Even today, in Sydney diocese you are not permitted to wear chasubles at the Eucharist, and this all reflects a certain controversy about the sacrificial nature of the Eucharist – an interesting subject for another time!