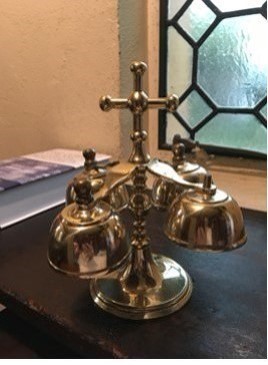 Last week I talked about the ‘smells’ (incense) now let’s talk about the bells! Why ring the ‘Sanctus bells’ and the church bell during the Eucharist? (‘Sanctus’ is Latin for ‘holy’ and is also used to name the hymn we sing in the middle of the Eucharistic Prayer, because it begins, ‘Holy, holy, holy…’)

They are also sometimes rung as the ancient hymn we call the Sanctus (see above) begins to be sung.

(at the second and third points. the church bell is also rung so the community outside may hear. Whatever they make of it, his reminds us that the Eucharist is not just offered for the people who turn up, but on behalf of the whole parish)