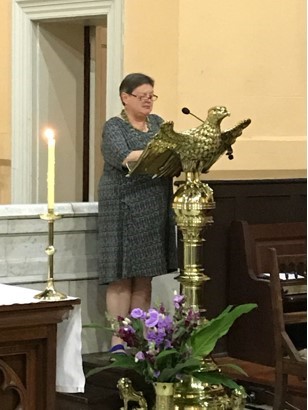 Do you know why it is that the ‘lectern’ at which the bible is read in Anglican churches is almost invariably designed like an eagle, so that the Scriptures rest on its outspread wings? There are early examples in England from the 13th century. Our Christ Church lectern is a fine example given to the parish in the 1880’s.

Here mythology may mix a bit with matters of faith! The eagle was thought to be the bird that could soar higher than any other bird, and so reach into the heavens, and so thought fit to carry the Word of God to his people.

The eagle is also the symbol for the fourth evangelist John. The ‘Prologue’ i.e. the first 14 verses of his Gospel  traditionally had a particular place in the liturgy (read at the end of the mass in the old rite)  so beautifully soars to the heights as it seeks to put into words the central mystery of the Christian faith – the doctrine of the Incarnation.

So now you know, if you didn’t before!